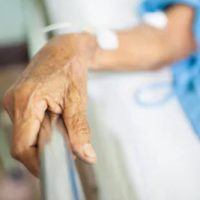 A lawsuit has now been filed against a Kingston Nursing Home, ManorCare, after an investigation by Health and Human Services found that an employee of the facility violently grabbed an elderly patient recovering from major surgery, causing severe bruising and broken ribs. The patient was admitted temporarily to ManorCare following a surgical procedure at Wilkes-Barre General Hospital, for the purpose of healing and rehabilitation, however, she reports that she began experiencing physical abuse within days of arriving.

According to a recent article, an employee who was present for the incident which resulted in the patient’s broken ribs, said the culpable employee’s violent behavior toward the patient startled them, and that the patient would have fallen from the bed and suffered even more serious injuries if the co-worker hadn’t physically intervened. The co-worker, who reported the abuse, was pressured to remain quiet by ManorCare. However, after a follow-up appointment at the hospital, doctors became aware of the patient’s unusual and concerning injuries and contacted Pennsylvania Health and Human Services.

As a result of their investigation and findings, Health and Human Services fined the ManorCare nearly $50,000–the second highest fine ever charged in Luzerne County–which should give some indication as to the severity of the injuries and treatment.

However, ManorCare has so far taken no action to remedy the situation beyond paying the fine and firing the culpable employee. This is concerning, particularly as ManorCare initially cited the fact that they were understaffed and the culpable employee was overworked as justifications for the employee’s behavior, implying that it’s far more of a systematic problem, likely to recur with other overworked staff members, as opposed to a one-off bad apple employee.

During a national pandemic, it has been difficult for many nursing homes and assisted care facilities to find consistent, safe, and reliable help. However, it is still the responsibility of the facility  to ensure that they are not being reckless. Attempting to care for more people than you have the resources to care for is not an excuse for the harm that occurs as a result.

Additionally, while the facility was fined by the state, none of that money goes to the injured party. These are just some of the reasons that many injured parties choose to pursue a personal injury lawsuit.

Elder abuse often goes unnoticed, as the people who experience it are tragically not always able to advocate for themselves. The care-taker/patient roles can create a complicated power dynamic that can prevent even lucid elderly adults from feeling free or safe to speak up about the harm they are experiencing. For this reason, it’s important to be vigilant in monitoring the well-being of any loved ones in assisted living, or who are dependent on others for their care. While the list below is by no means comprehensive, here are some signs to look for–any one of them in a clear sign that you should look deeper:

If you are concerned that a loved one is experiencing elder abuse, schedule a free initial consultation with the personal injury attorneys at the O’Donnell Law Offices serving clients in Kingston, Wilkes Barre, Hazleton and Pittston at 570-821-5717 or online today. There is no fee or costs until we win your case.

By O'Donnell Law Offices | Posted on February 5, 2021
« How Can a Personal Injury Attorney Help Hit and Run Victims?
How is a Pennsylvania Car Accident Settlement Calculated? »