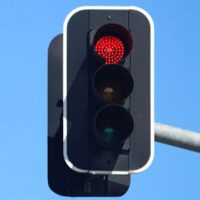 Despite lower traffic due to Covid-19, speeding has increased dramatically over the past year and a half. Along with speeding, there has been an increase in the running of red lights, and, consequently, in collisions and related injuries and fatalities. While this trend is nothing new, it has reached an all time high. Injuries and fatalities associated with red-light running have been steadily increasing over the past ten years, despite a variety of efforts to increase traffic safety and mitigate risks. While measures like installing red-light cameras have deterred red-light running to some degree, they have created other problems. For instance, as red-light camera installation increases, so too do the number of rear-end accidents at intersections.

Over 800 people every year die due to red-light running. Only 35% of those killed were traveling in the car that ran the red light. That means the vast majority of victims in red-light running accidents were pedestrians, cyclists, and drivers or passengers in other vehicles. It’s important to consider this when you choose not to reduce your speed when approaching a yellow light. Traffic signals at intersections are carefully timed in unison with crosswalks and turn lanes. By ignoring your red light, you also put everyone who is adhering to their corresponding traffic signal in jeopardy. The fact that many drivers speed up when approaching a red light can also result in far greater harm to pedestrians and cyclists.

Nearly 150,000 people are injured every year due to red-light runners. These injuries can range from whiplash to debilitating injuries including spinal cord, traumatic brain injuries, and paralysis. The medical bills and financial harm experienced due to just one severe crash like this can be hundreds of thousands of dollars. For many, the consequences can be catastrophic. A personal injury lawsuit allows victims of other drivers’ negligence to recover for these damages, by placing them back in the position they would have been in financially had the accident never occurred. Damages for a car accident can include reimbursement for all medical costs and treatment, as well as compensation for all future treatment, lost wages, and reduced earning potential if the injuries sustained will prevent you from returning to the same role or working in the same capacity as before. Additionally, compensation for pain and suffering can be sought for the physical and emotional trauma experienced due to the accident. In some cases, punitive damages, intended to punish the driver for especially reckless or negligent behavior, may also be appropriate.

If you have suffered serious injury due to a Pennsylvania car accident that was not your fault, you have legal options available. Schedule a free initial consultation with the personal injury attorneys at the O’Donnell Law Offices serving clients in Kingston, Wilkes Barre, Hazleton and Pittston at 570-821-5717 or online today. There is no fee or costs until we win your case.

By O'Donnell Law Offices | Posted on August 13, 2021
« Can I Get Workers’ Compensation For Heat Stroke?
Have You Been Injured In A Pennsylvania Boat Or Jetski Accident? »