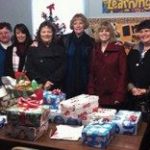 Attorney Neil T. O’Donnell, O’Donnell Law Offices, served as a moderator at the Pennsylvania Association for Justice[PAJ] Auto Law Update on November 28, 2012. The Update was held at the Scranton Hilton and Conference Center and offered 4 CLE credits. Attorney O’Donnell also addressed the attendees on the subject of effectively conducting and utilizing… Read More »

Kingston, PA O’Donnell Law Offices is pleased to announce that Attorney Neil T. O’Donnell was recently selected by his peers for inclusion in The Best Lawyers in America® 2013. Attorney O’Donnell was honored for his work in the practice area of Personal Injury Litigation—Plaintiffs. For three decades, Best Lawyers has been regarded by both the… Read More »

Attorney Michael O’Donnell of O’Donnell Law Offices has been named a Top 40 Under 40 by the National Trial Lawyers Association. The National Trial Lawyers Association is an exclusive group of trial attorneys practicing law throughout the United States and increases its membership by invitation only. Only a total of 40 attorneys in each… Read More »

O’Donnell Law Offices is pleased to announce Attorney Catherine R. O’Donnell has recently been selected for inclusion in the Martindale-Hubbell Bar Register of Preeminent Women Lawyers for the third consecutive year. This recognition by Martindale-Hubbell puts her among the elite women of the legal profession. The rating adds a dimension of distinction in that… Read More »

(Pennsylvania Law Weekly)—In two post-Koken cases, a Luzerne County judge has refused to sever the tort and underinsured motorist claims for trial. The decision follows a unanimous Luzerne County bench on the issue, according to court filings from the plaintiffs in the two unrelated cases. In both cases — Loefflad v. Nauks and Price… Read More »

Judge Lesa Gelb of the Luzerne County Court of Common Pleas recently handed down a pair of Orders on June 20, 2012 each separately dealing with a defendant’s Motion to Sever the trial of the tort and UIM claims in two different post-Koken litigation matters. Judge Gelb refused to sever the claims for trial… Read More »