In its self-described first examination of the traveling employee doctrine, the Pennsylvania Supreme Court ruled 7-0 that employees who travel for work are entitled to a rebuttable presumption of being within the course and scope of employment during the entirety of work-related travel. This necessarily includes the worker’s travel home at the conclusion of… Read More » 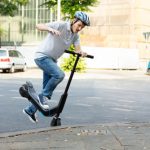 You have seen them in large cities. E-Scooters — all over the place. If you have ever wondered if people are being injured, the answer is a resounding yes. As reported in the AAJ Brief Magazine published in September, 2021, a research project at the Henry Ford Health System estimated that more than 103,000… Read More »

Earlier this week, in the cases of Sayles v. Allstate and Scott v. Travelers, the Pennsylvania Supreme Court ruled that such strict language in auto policies purporting to required insureds to attend medical exams conflicted with Section 1796 which is entitled “Mental or Physical Examinations of a Person”. The Supreme Court, in a 6… Read More »